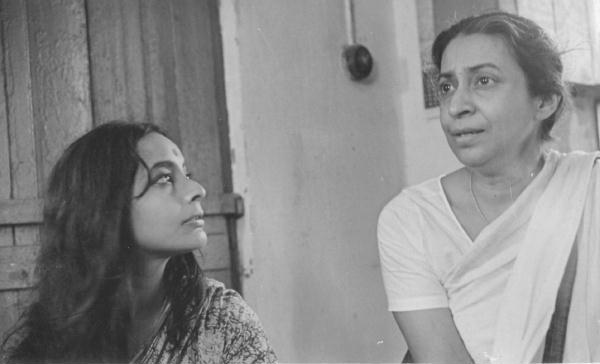 Ranjit (Ranjit Mullick), a lower middle-class young man, gets an opportunity to appear for an interview in a multinational firm. His uncle (Sekhar Chatterjee) has used his connections and the job is almost assured. His uncle had advised him to wear a proper western suit to impress his future bosses. On the day of his interview, Ranjit is unable to get his suit from the dry-cleaners as the laundry workers’ union has called a strike. After frantic efforts, he manages to borrow a suit from a friend but unfortunately misplaces it during fracas in a tram involving a pickpocket. He goes to the interview dressed in the traditional dhoti-kurta and for obvious reasons get summarily rejected. Frustration, anger and protest follow…

Interview is the first of the three films – Calcutta ’71 (1972) and Padatik (1973) being the other two – Mrinal Sen made in the early 1970s which are often collectively referred to as the ‘Calcutta Trilogy.’ Influenced by the tumultuous spirit of the time and the milieu, these films move away from the comforts of realistic narrative and attempt to analyse and castigate the socio-political system that leads to poverty and misery. The films also reflect the anger such deprivation generates and also the counter-reactions to such rebellion. The three films are also integrally rooted in the culture and geography of Calcutta – which provides a constant foundation of intellectual, political, social and audio-visual stimulation for the filmmaker.

Interview is a film with a thin and straight forward plot – Ranjit’s pursuit for the all–important western-style suit that will endow him with what his benefactor uncle Sekhar describes as ‘smartness’ apt for an employee of the Scottish managed mercantile firm. On the day of his interview, Ranjit discovers that he cannot get his suit from the dry cleaners as the workers’ union has called a wild-cat strike. Using his frenetic attempt to find a suitable suit as its basic premise the film puts together a diverse range of sound and images – news-reel footage, still photographs, pages of magazines, candid camera shots of the city, expressive music and sounds – in an attempt to arrive at a thematic structure bound by a political ideology that propagates change and rebellion within the framework of Marxism. The plot of Interview thus serves as an excuse to arrange the fragments of cinema in order to, as Sen remarked, “depict the all-pervasiveness of the colonial legacy … and the need for political, social and economic change.” In fact, so strong is the director’s endeavour to do away with the realistic idiom of cinema and the expectations of wish-fulfilment it creates that Interview does not show it’s central and defining event– namely the dhoti-kurta clad protagonist’s interview with his sahib and brown sahib employers. Instead three questions from the interview are inserted along with the visuals of the corresponding optical soundtrack in the title sequence of the film.

The film’s prologue – a collage of newsreel footage accompanied by ominous background music – of statues of colonial masters being uprooted by giant cranes stands as a metaphor of transfer of power and firmly establishes the context of the story that would follow. After the title sequence the film operates within a somewhat realistic framework but the sequences are episodic and sparse – they serve the purpose of merely illustrating the basics of the story. Instead of endeavouring to develop characters and provide them with individuality there is an intentional attempt to deny them the subjectivity of individual experience; Ranjit, his doting widowed mother, his elder sister, his fiancée and friends, their behaviour, their aspirations and reactions remain extremely mundane, almost bordering on cliché. With his strong attachment to his mother, his willing acceptance of a cushy job through the backdoor and dreams of a prosperous life with his artist fiancé Bulbul, Ranjit the protagonist is portrayed as the archetype of the middle class youth of the period who opts for security and prosperity at the cost of moral, ethical principles. Instead of creating empathy with the characters the film makes an effort to examine the cultural and social factors that determine their responses to external and internal stimuli. A shot of Bulbul enraptured in a reverie of conjugal bliss is juxtaposed with the merry smile of Supriya Devi staring out of a hoarding of the smash-hit Duti Mon stands as an admission of the role of popular cinema in perpetuating myths of petty happiness.

The disruption of emotional continuity and mimetic depiction of the world in Interview is heavily influenced by the techniques of alienation developed by Bertolt Brecht and applied to cinema most notably by Jean Luc Godard. Ironically, the first major instance of alienation is also the most witty and engaging moment of the film. When Ranjit boards a tram and begins his search for the suit (and consequently the beginning of high drama), the film captures a young girl and a middle age passenger flipping through a popular film magazine, where a production still of Interview showing Ranjit Mullick traveling in the tram comes just after a few photographs of Uttam Kumar with his heroines! The bemused girl attempts to make sure that the person she is seeing in the tram is the same film-star whose photograph appears in the magazine is utilized by the director to create a major breach in the drama by compelling the actor to step out of his role in the narrative and start a direct dialogue with the audience. Breaking all the illusions, Ranjit confesses that he is no film star but just an average fellow who has allowed Mrinal Sen – “the guy who makes movies” to chronicle his adventures and thus make a film which as he jeeringly expresses will “make money for his business.” By inter-cutting Ranjit’s speech with shots of the film’s camera-crew (KK Mahajan with a hand-held camera), the director opens up the debate between the reality itself and the realistic depiction of reality that is the cornerstone of cause and effect narrative cinema. The argument progresses further when Ranjit exhorts the viewer to believe that what he has seen in the film so far is all ‘true’ except for the fact that his mother as shown in the film is not his actual mother but an actor who he admits is doing a “wonderful job in portraying his genuine mother.” To illustrate the point the director immediately inserts a clip of Satyajit Ray’s Pather Panchali (1955), the film in which the actor who plays Ranjit’s mother (Karuna Bannerjee) gave her most celebrated performance as Sarbajaya. The middle-aged passenger’s appreciation of the interview’s story as a portrayal of the life of the common man followed by shot of poster of a Hollywood heroine defaced by protest posters of cine-workers’ association and newsreel shots of a public demonstration by them (accompanied by the revolutionary slogan of “Inqilab Zindabad” on the soundtrack) signifies the director’s belief that newer forms of cinematic story-telling are needed to voice the reality of times and the struggle of common masses to survive. The next shot of a hoarding of Sean Connery playing James Bond with machine-gun fire on the audio track acts as a pointer to his awareness of the oppressive power of the cultural products of colonialism/imperialism and the struggle towards creating newer cinematic idioms would be a bloody one indeed!

In the penultimate scene of Interview – shot in a theatrical style – the actor is once more made to step out of his role and face a hostile interrogation from the observers. This exposes his hypocritical bravura of claiming to be happy and self-sufficient with his petty job. But now, as the unseen spectators remind him that he had made desperate attempts to acquire the suit which will ensure his lucrative job and his dreams of happiness and prosperity that the new job ensures, Ranjit is now left in a dark abyss (the shots of Ranjit lit up by a harsh spotlight amidst a completely dark background act as the perfect metaphor) and compelled to own up his pretences. This admission also makes him understand the terrible fallacy of the system which refuses to acknowledge his talents and individuality but tries to estimate his capacity through standards which are steeped in colonial (and hence exploitative) ethics. So in the final act of the film, Ranjit’s action of throwing a stone at and his subsequent denudation of a mannequin displaying a western-style suit is juxtaposed with an extremely fast paced montage – shots of street demonstrations, news-clippings and photographs of the Vietnam War, Latin American and African revolutionaries with sounds of war and rousing music – strongly identifying his anger with the battles against colonial structures that were going on all over the world during the late 1960s and early 1970s.

Interview is an intellectually challenging and structurally adventurous film – one which breaks down conventional forms of narration and dares the viewer to understand its logic of arranging visuals and audio and thus arrive at its thematic and ideological position. Sen’s admission that the film would “shock a section of our audiences (to violate the) outrageously conformist… mainstream of our cinema” makes the film somewhat pedagogical. The patience and erudition its multi-layered structure demands from its viewers, leaves it drained of all emotions and throws up major bottlenecks in communicating with the very masses whose story and struggle the film claims to narrate. However, with newer conflicts affecting India and the world with the march of global capital (and its inherent socio-cultural values) assuming newer dimensions in this era of liberalization, much of Interview’s intellectual thesis holds relevance. The film retains its value as a documentation of the conflict-wrecked late 1960’s and early ‘70s and is also a prime example of the efforts made in India by some directors to do away with traditional modes of story-telling in cinema and set up more daring, more subversive compositions.

Interview received the Jury Award at the Colombo International Film Festival (1972) while Ranjit Mullick, in his debut performance, was awarded the Best Actor Prize at the Karlovy Vary Film Festival.