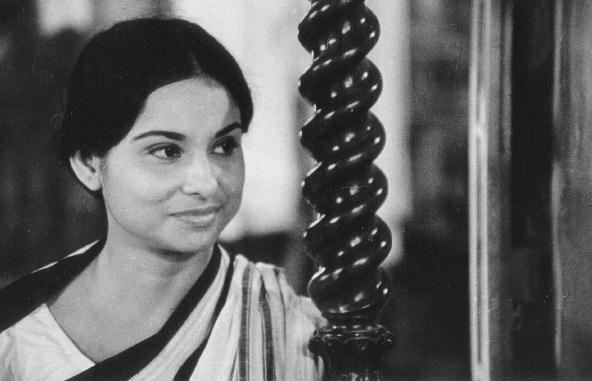 Calcutta ’71 is a compilation of 4 different stories on theme of poverty and its consequences as observed by a young man (Debraj Roy) who remains eternally twenty. The three main stories are set apart by 10 years in time leading to the last segment set in Calcutta of 1971.  The young man is finally killed off in the end of the film when he incites the audience/people to protest against the injustices of the system that perpetuates degradation of human existence.

Calcutta ’71 is the second film in what is generally referred to as Mrinal Sen’s ‘The Calcutta Trilogy’ – films which established his reputation as a ‘political’ filmmaker with a broadly Marxist ideology and also as a filmmaker willing to go beyond established narrative structures in order set up a more challenging interaction with the film and its audience. These three films – Interview (1970) and Padatik (1973) being the other two – also stand as the chronicles of that socio-politically tumultuous period in history.

Poverty and its consequences being the major theme of Calcutta ’71, the film uses the plots of the 4 stories not to delve into the socio-economic reasons of poverty but rather on the human reactions to debasement and misery. The film begins with a montage of newsreel shots of Calcutta (now Kolkata) bound together by a violent acid-rock music soundtrack that firmly establishes the milieu and the zeitgeist of the city in the early 1970s. The prologue leads to a journey back in time.

The first story, set in 1933 depicts a lower middle class family trapped in their dilapidated hut trying to cling to their last vestiges of dignity on a terrible monsoon night. In the end the family is forced to get out of their hut and seek shelter along with other wretched of the earth and the very mongrel the cynical head of the family (Satya Bannerjee) had some time earlier kicked out of their shanty. The reaction of the family to their misery is passive, resigned – there is no sense of anger and that is why this segment of Calcutta ’71 is also the most realistic in its idiom. But as the film progresses the characters’ response to their condition changes and a sense of protest is becomes evident. The narrative style of the film too becomes more and more disruptive – news-paper clippings, newsreel footage, text-graphics etc. are inserted within the main plot – reflecting the mood of unrest that is part of the character’s psyche and the spirit of the times in which the individual stories are set.

In the second story, set during the Bengal famine of 1943, Shobhana (Madhabi Mukherjee) – the young woman who along with her teenaged sister is forced into prostitution with the active complicity of their own mother (Binota Bose) – protests against the terrible injustice by committing suicide unable to bear the hypocrisy of the attempt to maintain the pretence of middle-class dignity. The segment also subverts the persona of the self-sacrificing mother so common in mainstream Indian cinema – it is the mother, despite her squeaky clean appearance, who forces her progeny into a life of misery for her own material and social comforts. The segment is devoid of any sense of melodrama nor there is any overt attempt to draw empathy – the characters remain true to their social types and the sparse dialogues convey nothing beyond the minimum information necessary for the progression of the story. The structure is deliberately fragmented by insertions of newsreel footage of the Bengal Famine thus providing the backdrop of Shobhana’s self-nihilistic mode of protest.

The third story, set in 1953, portraying the revenge taken by a teenaged rice-smuggler on a middle-class bully stands as a gritty portrayal of the psychology and anger of children deprived of the joys of childhood while the final story of Calcutta ’71, which shows a completely intoxicated political leader (Ajitesh Bannerjee) delivering a lecture on the effects of poverty to his sycophants while attending a high society party, is also the most jarring and disruptive segment of the film. The fierce rock music (composed by Ananda Shankar and played by a band led by Cyrus Tata) accompanied by psychedelic strobe lights provides a perfect expression to the anger and rebellious spirit of the times. The cut to a wailing newborn street-child from the politician’s speech about a new India emerging out of the chaos stands as the key to the ideological basis of the film’s discourse. The sequence is extremely fragmented and disruptive – the speech of the politician, which is almost a monologue, is juxtaposed with collages of still photographs of emaciated victim’s of hunger, newsreel shots of aggressive street demonstrations and consequent police repression, documentary footage of Vietnam War and other revolutionary movements, political graffiti proclaiming the politics of annihilation and even a shot from the iconic mannequin breaking sequence from Interview! The collage of diverse materials is an effort to force the viewer to identify the history of India as proclaimed by the title-card which links-up the 4 stories – “the history of poverty, the history of deprivation and the history of exploitation”– a legacy not of peaceful synthesis but one of struggle against brutal indignity and hunger.

In the final episode of the film, the young man – who has been shot dead – reappears like the chorus in classical Greek theater. The sequence is shot in a theatrical manner with a harsh spotlight illuminating the young man’s face against a pitch-black backdrop. The young man – talking directly to the audience – strives to analyze the major themes of the preceding stories and thus explain how at the end hungry people become violent and the process creates newer and more potent forms of rebellion. Just at the crucial moment when the young man actively exhorts the audience to participate in direct action against the injustices of poverty he is killed off again. The sequence of his death comprising frenetic hand-held tracking shots chasing the victim through the dingy by-lanes of Calcutta is a deliberate evocation of the brutal killings of the Naxalite students by the forces of the Indian state that was a very common phenomenon of Calcutta at that period. The final shot of the film where the camera tilts up from the young man’s corpse to a panorama of the dawn breaking on the Calcutta Maidan accompanied by the rousing signature tune of the All India Radio signifies the director’s belief in the positives that emerge out of the people’s resistance to the forces of oppression.

Calcutta ’71 in Mrinal Sen’s own words is a study of “the dialectics of hunger, the dialectics of poverty”– the movement from resignation and apathy to anger and protest and the possibility of a more equitable social condition emerging out of such rebellion. The film is devoid of all pleasures of the narrative and demands and a great sense of participation, patience and intellectual erudition in order to appreciate its cinematic experimentations and its hypothesis on “poverty — the most vital reality of our country, the basic factor in the indignity of our people.” The film retains its value as a chronicle of the restless late 1960s and early 1970s and as an exploration to the historical factors responsible for such anger. However the film’s experiments (both in terms of story-telling and cinematic techniques) which sometimes borders on playfulness and arrogance makes it extremely esoteric and limits its audience to hard-core cineastes familiar with these challenging forms of cinematic compositions.

Calcutta ’71 won the Silver Lotus for the Second Best Feature Film of 1972. The film was also shown at the Competitive Section of the 1973 Venice Film Festival and a host of other major international film festivals.