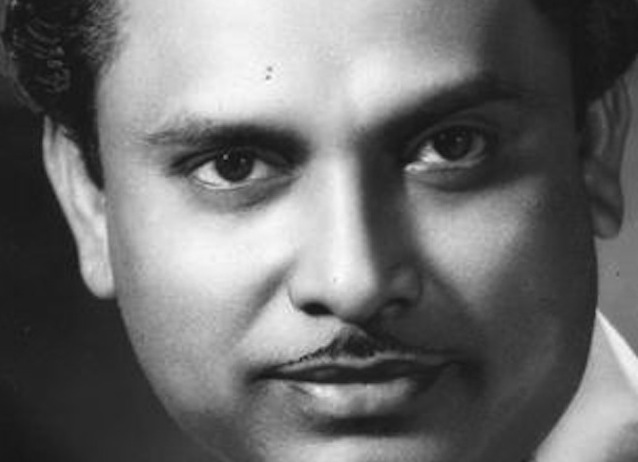 Anil Biswas was without doubt one of the greatest but most underrated Music Directors in Indian Cinema.

He was born on July 7th, 1914 in Barisal, now in Bangladesh. Being a talented tabla player, he worked initially in amateur theatre as a child singer. His student days saw him becoming a political activist, going to jail repeatedly as he associated himself with terrorist insurgency movements in Bengal. A fellow freedom fighter who spent time with Biswas in Barisal prison in 1930, Professor Satyavrata Ghosh, wrote a piece on his association with Biswas titled, Reminiscences Of A Friend In Music, recalled their life in jail, “Locked up in the evening, we would jump about, though not in enjoyment, for we did not know anyway else to fight the mosquitoes. The British Lion was an easier opponent! As we could not sleep, music was the only pastime and Anil was our natural leader.” He also goes on to add that, “He should have been an active revo- lutionary, at the most, a singer of inspiring patriotic songs. But music was in his blood. And he was destined to be successful.”

Successful, Biswas was. He received early musical assignments from Kazi Nazrul Islam at the Megaphone Gramophone Company. Followed several Calcutta Theatre Stage Productions notably at the Rangmahal Theatre, where he scored the music and did some acting as well. The decisive move was once he moved to Bombay in 1934, where he was first employed at the Eastern Art Syndicate. Anil Biswas’ first film as composer was Dharam Ki Devi (1935). He then joined Sagar Movietone – helping its main actor Surendra become a big singing star, collaborating with him and filmmaker Mehboob Khan on several films. Biswas moved on to National Studios, from 1940-1942, wherein he gave the music for three outstanding Mehboob Khan films – Aurat (1940), Bahen (1941) and Roti (1942). His recitative prose song, Roti, Roti, Roti, in the last mentioned film helped give the film its parable dimension and came close to functioning as an indigenous Brechtian mode in Indian cinema at that time!

Following the closure of National Studios, Anilda then shifted to Bombay Talkies where he worked from 1942-46. His biggest success at Bombay Talkies was Kismet, coming the following year in 1943.

Kismet, one of the landmark films of Indian cinema, was a tremendous success running for over three years at the Roxy theatre in Calcutta. A lost and found crime drama with Ashok Kumar playing the ‘anti-hero’ – a petty pickpocket from the streets, among the major reasons for its success was Anilda’s evergreen musical score. By now trained playback singers were entering the film industry thereby giving music directors opportunities to try out newer and more complex sounds. The songs in Kismet, be it the patriotic Door Hato O Duniyawalon Hindustan Humara Hai or the sad Ghar Ghar Mein Diwali; the soothing lullaby Dheere Dheere Aa or the devotional Ab Tere Sivai, they see Anilda make splendid use of Amirbai Karnataki’s full throated voice for heroine Mumtaz Shanti.

Anil Biswas’s best-known compositions are among the most effective film adaptations of theatrical music with 12 piece orchestras and full-blooded choral effects. In fact, Anil Biswas’s contribution to film music is multi-faceted. Beyond all the musical masterpieces that Anilda composed, he was also responsible for being the man behind such voices as Surendranath, Parul Ghosh (his sister married to renowned flutist Pannalal Ghosh), Sitara Devi, Mukesh, Talat Mahmood besides monitoring Lata Mangeshkar’s early career. It was Anilda who taught Lata and other singers the techniques of breath control while singing and putting emphasis on syllables that came on the beat of the song. It was Biswas, who, not only gave Mukesh his first successful song, Dil Jalta Hai from Pehli Nazar (1945), but also encouraged him to come out of being a KL Saigal clone.

And it was Anil Biswas, who insisted that Talat Mahmood keep the tremor in his voice, which other composers saw as a flaw. As it was, it was this quiver in his voice that made Talat the unique singer he was, particularly for soft romantic numbers, and Biswas was right in asking him to go along with it. This is best illustrated in two outstanding songs among others that he sang under Anilda’s Baton – Ae Dil Mujhe Aisi Jagah Le Chal (Arzoo (1950)) and Seene Mein Sulagten Hain Armaan with Lata from Tarana (1951), both times his voice going ever so smoothly on Dilip Kumar. It is also said that Biswas  responsible for the basic structure of film songs that we know it today and was a pioneer in using the counter melody and the use of Raag Mala in his compositions.

Feeling disillusioned with the changing trends and the tragic end of his younger brother and elder son in the year 1961, Anilda shifted base to Delhi. He took charge as Chief Producer (Sugam Sangeet) at AIR, Delhi on 1st March 1963 and served there upto June 1975, though with a break in between. He was also the Advisor for Music at the prestigious Jawaharlal Nehru University (JNU) in Delhi for a while. As his designation was equivalent to that of a Professor, his friend down the years, Professor Ghosh also quoted above, remembered that, “he used to `boast’ that he was the only Matriculate University Professor in India!”

In between, he did the odd film like Mahesh Kaul’s Sautela Bhai before retiring with Motilal’s Chhoti Chhoti Baaten in 1965. The latter film, although failing at the box office, is still remembered for his singer wife Meena Kapoor’s wonderful rendering of Kuchh Aur Zamana Kehta Hai. Incidentally, Anilda’s one grouse with the Film Industry was that it never gave Meena Kapoor (Rasiya Re – Pardesi) her due. He always used to say that here was a voice with base, huskiness, sweetness and sex! But the film industry just didn’t know how to use it!

On the personal side, Anil Biswas was first married to well-known actress of the 1930s and 40s, Ashalata, who later turned producer, and after their divorce in the mid 1950s, he married Meena Kapoor in 1959. His grand-daughter, Paromita Vohra, is a prominent filmmaker in India today, particularly in the field of non-fiction filmmaking.