A freedom fighter lodged in the Nasik Central Jail in 1927, recounts to his inmates memories of his childhood and how his mother brought him up with all the right values during troubled times. The account traces the travails of a rural Marathi family headed by a midlevel landlord and his joint family. A reversal of fortune brought about by ever incurring debts necessitates that the family move out to lesser living conditions but it is the mother (Vanmala) who keeps up the spirit and imbues little Shyam (Madhav Vaze) with all the true morals that stand him in good stead in the years to come.

Shyamchi Aai is a fictionalized account of the childhood years of Sane Guruji (1899-1950) narrated in a long flashback. A nationalist, influenced by Vinoba Bhave and especially Gandhiji, he was imprisoned repeatedly for his work among the peasantry and participation in the Quit India agitations. His book Shyamchi Aai, written in jail, has 45 episodes in which Shyam, a youth living in poverty in Konkan, recalls the teachings of his mother, a devoutly religious person with an earthy and practical philosophy.

Directed by PK Atre, the film is set in an age where robbers waylaid weary travelers and the division of a house amongst brothers was an act of sacrilege frowned upon by society. It relies heavily on what are consequently stereotypes today: the ever sacrificing mother who dotes on her children and wait on her husband; the hardworking father who strives to make ends meet; the ungrateful brothers and their evil wives; the evil money lender who does not hesitate to propose to his debtor, the father of the kid in this case, to sell off his wife to settle his dues; the strict school master who is made a fool of by his students. Overriding all these is the mother-son track that the film deals with and derives its name from – Shyamchi Aai (meaning Shyam’s Mother). Through anecdotes, persuasion, religious songs, examples from mythologies and sometimes outright force, the mother instills in her son the values necessary for a clean soul and upright rearing. In one scene where she bathes her young son, she tells him that it is more important to clean the dirt in one’s mind than the dirt in the feet. The film is replete with such earthly words of wisdom that matures the child over the length of the film till he attains the gall to tell few of his rich friends that he may be poor, but rich in mind! 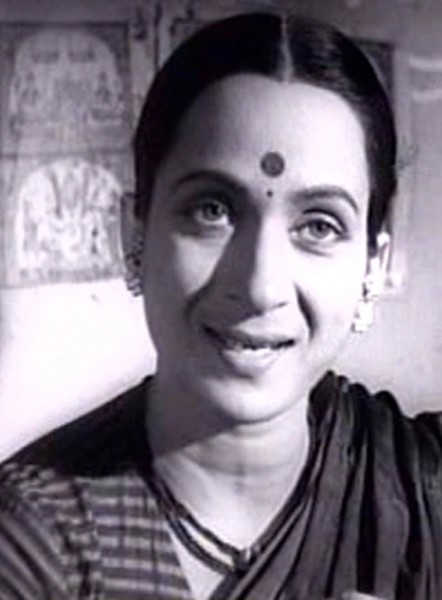 The film has a simplicity that is obviously naive by today’s standards. But it is this very simplicity that reaches out to the viewers because of its honesty and straightforwardness. Since it draws largely from true-life incidents, the structure of the film is episodic. As soon as it switches to flashback from the establishing jail segment, the whole family is introduced in a well thought out sequence and the basic relationships established. Little Shyam is introduced stealing apricots from the kitchen and immediately endears himself to the viewers. The father is established as a landlord with ‘special revenue rights’ who sets out to embark on a journey to collect dues from his tenants. The family is worried about his impending voyage but he promises to return before the dusk. On his way back the music assumes a grave tone, anticipating danger. The director cuts to parallel action of the anxious family waiting for his arrival. The beautiful mother decked in jewelry has just returned from the temple but her right eyelid flutters, which is a bad sign. The film cuts back to the father’s journey; robbers accost him and are about to kill him when the god-fearing mother has a premonition; she duly sits in front of a congress of gods and begins to pray fervently for her husband’s safe arrival; and lo and behold, the robbers suddenly take pity on him as he implores that he has children back home, the robbers realize that they also rob to feed their children and so they spare him; and the mother’s prayers are answered. And her husband returns safely with a negligible head injury. Cliched as it looks now, the segment still has an appeal that manages to keep the viewers on tenterhooks. And therein lies its seduction: It is predictable but we are hooked nevertheless, because a seduction is always alluring and gains its charm through its repetitious value.

The freedom movement forms the backbone of the film and also its subtext. The father (an over the top Damuanna Joshi) is a follower of Lokmanya Tilak who goes to jail for a period of 4 months. Shyam is proud of his father and invokes Tilak at necessary junctures of the film. It forecasts his political aspirations and readies him for the necessary sacrifices. In one melodramatic scene from the film, he allows himself to be caned on his palm 12 times by his teacher as opposed to Tilak’s 6 years in jail without batting an eyelid. The scene foreshadows Manoj Kumar’s burning of his palm on a lighted piece of candle as he sings a patriotic song in the film Shaheed (1965).

Shyamchi Aai is a well wrought out melodrama with its quota of exaggerations and myths. Little Shyam crosses a turbulent river during a thunderstorm despite the warnings of his friends because his love for his mother is deeper than the river! This recalls a similar myth where Vidyasagar crossed the turbulent Damodar river to reach out to his mother at least half a century ago in Bengal. One does not fail to draw the parallel and comes to the conclusion about the average Indian male’s mother-fixation that sometimes borders on the erotic/sexual.

In the last segment little Shyam has a dream that his mother is ill and calling out to him. He immediately sets out and traverses the sea and earth to reach his mother. His journey is intercut with the sufferings of his mother who is on her deathbed, surrounded by her family members. She enquires about Shyam; will he be able to reach in time, we wonder. The tension builds up as little Shyam walks through hail and storm, travels on locomotive and ship, undaunted. The viewers root for the young Shyam so that he can meet his mother before she breathes her last and the two could exchange the obligatory last dialogues. But he learns of his mother’s death when he stumbles onto his aunt at a harbour. He is aggrieved to hear the news but continues with his journey and breaks out into a song of motherly love, which is highlighted by shots of various young animals suckling their mothers. We are taken in by the pathos of the segment despite its melodramatic treatment because by this time we have become used to the design and don’t mind.

It is easy to see why this sentimental tale of motherly love and sacrifice appealed to the audience when it was first released more than 50 years ago. It has a taut narrative, sprinkling of patriotism, immensely hummable songs (music by Vasant Desai) and identifiable characters and plays heavily on stereotypes and melodrama, which is always a safe proposition, commercially speaking. The audience feels comfortable in this old-fashioned self-ensconced world of family values where the status quo is ultimately and rigidly maintained against heavy odds. An entire generation of Marathi audience has been brought up on this film that gains its edge also from the solid performance of the lead actress, Vanmala. Special mention must also be made of Madhav Vaze, playing young Shyam. He delivers a commendable performance, endearing himself to the viewers.

Shyamchi Aai remains a cult film in the history of Marathi cinema and is still fondly remembered and evoked by film scholars and students. The film won the first ever National Award for the Best Film in 1954 (for films made in 1953), 50 years before another Marathi film finally did it again, Shwaas in 2004.