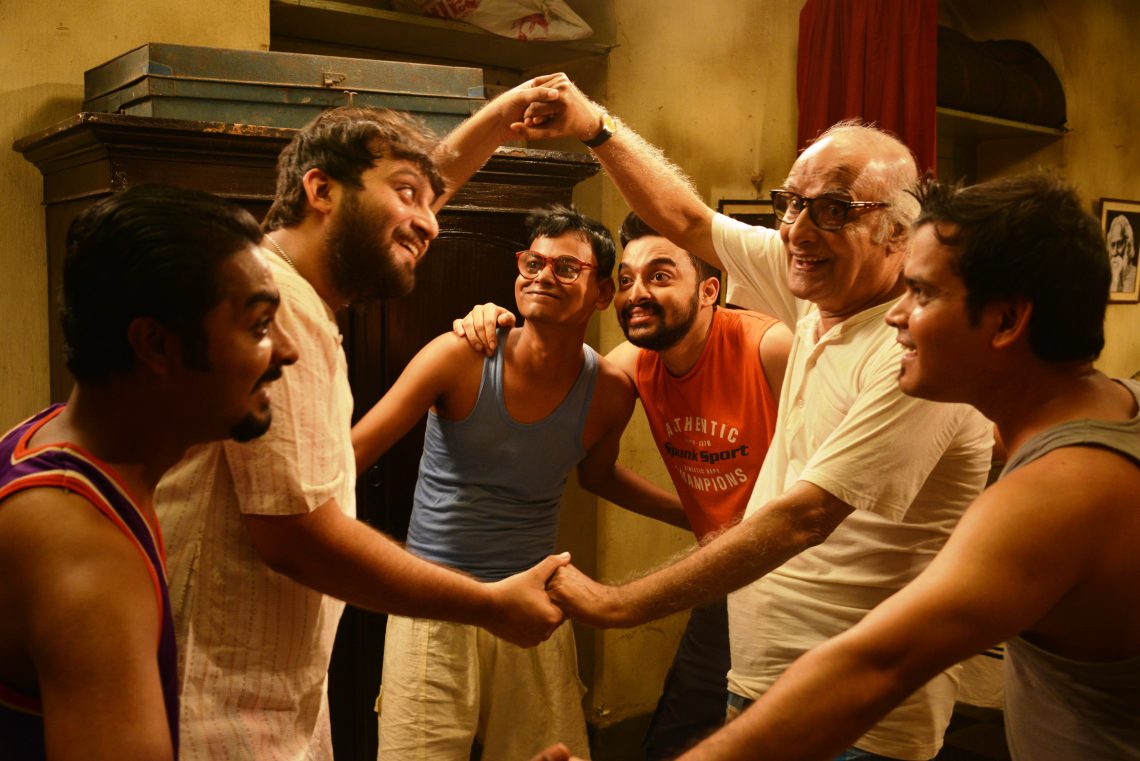 Ka Kha Ga Gha is a wholesome comedy that is also a self-reflexive film. The story revolves around 72-year-old Madhab Duta (Paran Bandopadhyay) who left his parents behind to find a footing in the film industry as a hero. Sadly, his dreams remained unfulfilled. He turns his Kolkata residence into a mess offering shelter to youngsters who have come with dreams of making it in films. How the older man and his batch of tenants realize their dream makes for the rest of the story.

The core of this film, directed by Krishnendu Chatterji, takes us back to Nadira Babbar’s Ekjut’s wonderful play Yeh Hai Bambai Meri Jaan, which sustains its popularity across audiences of all classes. The subject is not exactly new but it takes on a solid premise that is quite convincing. The strange title of the film, Ka Kha Ga Gha is the name of a group that, under the guidance of Madhab Dutta, take up a mission that will fulfill their dreams of producing a dream film which they will be a part of in different ways. The name is coined from the first letter of the names of four members of the group – Kalyan, Kharaj, Ganesh and Ghanta. This does not quite reflect positively on their imagination and that sort of sets the pace of the film.

The opening is emotionally touching. Madhab Dutta who runs a small tea-shop in the complex of a film studio does not tire of repeating the story of his unfulfilled dreams to his customers who are also his friends. During one of these narrations, he goes back to his past when he tells his father that he is not interested in the family business but wants to go to Kolkata to become an actor. This brief flashback is woven beautifully into the present that shows Madhab Dutta in his present age while his parents are shown like they were in the past. It is stylized to reflect a bygone age and that makes it a telling moment in the film. Madhab Dutta’s long track record in failing to fulfill his dreams has gifted him with the foresight of recognizing young men walking into the studio as having come to make it in films. He admits that though he came to become Uttam Kumar, he has worked with many great actors as an ‘extra’.

Trust a veteran actor like Paran Bandopadhyay to do more than justice to the character of Madhab Dutta, the ‘hero, of this rather unusual film. The youngsters, who stay in his mess and to whom he is mentor to, are a varied lot but only Lama and Samadarshi are able to inject their sketchy characters with some flesh and blood while the others are much too clichéd to make an impression. Aparajita Adya as the biscuit factory owner’s wife who obsesses with begetting a child even 25 years after marriage is a scream; she is so good. It is a character with several shades and she performs it to perfection. Kaushik Ganguly, who is perhaps a better actor than director, plays the biscuit factory owner with the hilarious touch of explaining and understanding anything and everything with biscuits. One room in his home is wallpapered entirely with biscuits of different kinds. The director could have drawn more out of this character but he fails to mainly because the film begins to drag when the camera and the script focus too much on the mess residents and that too without much logic.

The songs (Anindya Chatterjee) and the background score (Prabuddha Banerjee) fit neatly into the simple ambience of the film and one duet belted out by Shreya Ghoshal and Arijit Singh brings out the subtle romance of the scene between one of the would-be actors and his girlfriend very well. The director has also cleverly incorporated an item number inside a biscuit factory without it looking like a needless intrusion. The camera, though, moves all over distractedly in the beginning to thankfully steady down as the narrative unfolds. The location of the mess in a narrow lane in the northern part of Kolkata brings with it a touch of nostalgia for old timers. However, Ka Kha Ga Gha could have been a much better film if the director had controlled the temptation to go on with the story when he could have done it within 80 minutes to begin with. At 136 minutes, for all its little moments, its appears highly stretched.